Amanda Bryant stars as Jennifer March, the best realtor in town. She was called by a stranger asking to see a house. She impatiently waits for their arrival, talking on the phone when she sees them pull up in a red sportscar. She looks on in dsigust as two scruffy looking men get out and announce they were there to see the house. Jennifer introduces herself and tells them to follow her into the house. The men follow her inside and she queries “You do know this house is listed for 200,000 right?” to which the men glance at each other, share an inside joke and smile. She can tell they couldn’t possibly afford the house, and they are just wasting her time. She decides to give them a quick tour. As she leads them on the tour, one man stays behind briefly to drop off a bag on the floor. She starts the tour in the living room, flippantly announcing features in an attempt to hurry the tour along. They pass a sitting room filled with clothing and she begins climbing the stairs, not knowing one of the men is behind her snapping photos of her ass. After sharing the ass picture with his friend, the two men follow behind Jennifer to the upstairs bedroom where she shows them the master bedroom and bathroom, and she sees them taking pictures of her rather than the house. She asks them if they were serious buyers or not to which they simply reply with a glance between themselves. Annoyed, she leads them back to the door and she not-so-subtely tells them to leave and stop wasting her time.

One man passes by her while the other lingers behind her. The man rummages in his bag and pulls out some rope and duct tape and informs her that she will not be making her next appointment. The man behind Jennifer suddenly grabs her and begins kissing her and rubbing her pussy through her skirt. The men then tie her hands behind her back, tape her mouth shut and the first man hoists her over his shoulder, gives her ass a slap and carries her off to the upstairs bedroom. The men carry her into the upstairs bedroom where they tear down the sheets, and tied her spread eagle to the bed. Then they roughly tore her shirt open, and sliced her skirt, bra and panties off of her with a knife! She screamed and cried through the tape, terrified of what they were going to do next. The first man undressed completely, and mounted her, announcing “This is what we do to arrogant cunts” and pounded away on her, unleashing his cum all over her chest. Then the second man returns to untie her and reposition her face down-ass up and bangs away on her from behind. After a while, he retrieves a leftover piece of rope, wraps it around her neck and strangles her from behind! She can’t possibly fight without losing balance. The man continues to fuck her as her eyes roll back, go wide, and finally she goes limp. He lets her body flop down onto the bed, repositions her body so that her legs were open. He fetches his camera and snaps a photo of her body, saying “Now this is a photo that will sell some houses” before leaving her body behind for the homeowners to find. 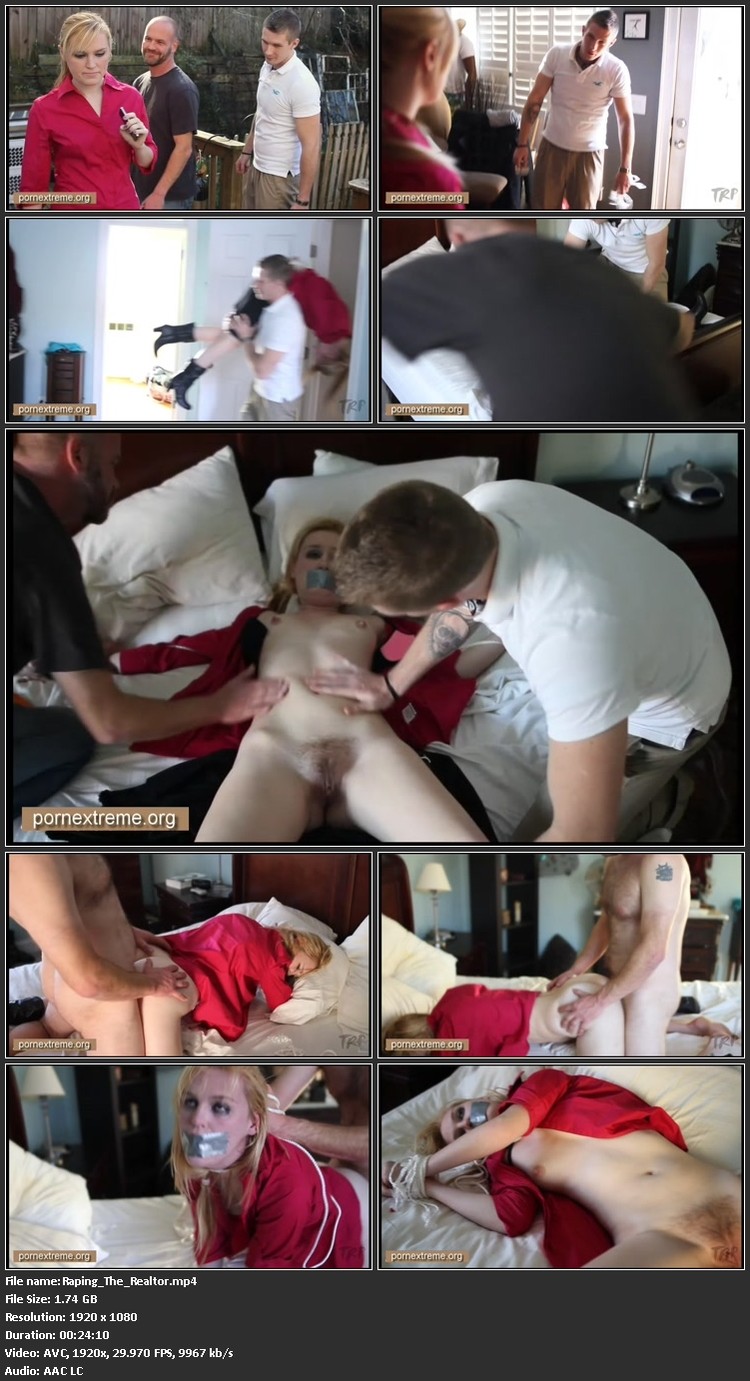