Batwoman is sitting in her office with her civilian outfit. Her computer buzzed as a distress signal flashes on screen. She suited up in her Batwoman outfit and left her office. She’s tracked the threat down to an abandoned warehouse. She walked into the warehouse confidently and begun her search for the bomb. After a quick search she’s located the bomb, it’s counting down. She defuses the bomb very quickly. Surprised by the ease of the situation, Batwoman is caught unawares as suddenly the bomb shoots some gas on Batwoman. She chokes on the gas and starts feeling dizzy. She holds her head with her hands and shakes her head to clear hear mind. Realizing she’s walked into a trap, she stumbles slowly, trying to leave the warehouse. A henchman shows up, trying to stop her from leaving. Batwoman desperately tries to defeat the henchman, but she’s too dizzy and missed her attacks. The henchman takes full advantage and puts some damage on her. Batwoman tries to defend herself, but her strength was worn and eventually overpowered by the henchman. Batwoman is lying on the ground after the fight. The henchman examined her body suit and put a remote controlled vibrator inside her pussy and closed her suit after. He carries and ties her to a X-Poe/chair in another room of the warehouse. He takes out the remote and presses a button. A rapidly vibrating sound comes from the heroine’s crotch. Sometime later, Batwoman wakes up and finds herself tied in an room with no sign of the henchman, surprised by the strong stimulation from her pussy. She desperately tries to loose her bonds. Her orgasm builds up and her moans increase as she gets close to breaking the bonds. Despite herself, she cums, soaking through her costume. She gets one hand loose and breaks free. She tries to remove the vibrator from her crotch, but the henchman shows up. She struggles not to moan, takes a deep breath and dashes at the henchman. With the ongoing orgasm built, Batwoman is struggling to focus on the fight.

The henchman is no match for her super-athlete speed. Batwoman easily blocks off his attacks and strikes back, subduing him. Batwoman approaches to finish the henchman off when suddenly a terrible expression shows on her face She’s unable to control the orgasm any longer. The henchman takes the chance to choke her and throws a few belly punches at her. The choking and punches drives Batwoman crazy. Exhausted, Batwoman lost to the overwhelming orgasm and cums in front of the henchman, who laughs at her. Batwoman grabs a gadget from her utility belt and throws it at the henchman, stunning him. Looking nervous with another orgasm building up again, Batwoman leans against the wall and walks slowly to leave the warehouse. The henchman recovered from the stun effect, catches up from behind and delivers a demeaning slap to Batwoman’s butt. Batwoman, exhausted, is forced to fight the henchman again. Heavily affected by another orgasm build up, she mindlessly throws bad attacks. The hechman overpowers her and grabs her by the crotch and presses to get her to orgasm even faster. Batwoman moans desperately, nearing another orgasm. The henchman stops and pulls on her hair. Batwoman defiantly refuses, but she’s knocked out with a chloroform rag. The henchman ties her to the chair again and places another vibrating wand to her pussy with a camera facing her. He tells Batwoman how orgasm will be broadcast to all of Gotham. Try as she might, she can’t fight the sensations. She begs for everyone to turn away, to stop watching as she uncontrollably orgasms over and over. As Batwoman cums, the henchman moves to unmask her. 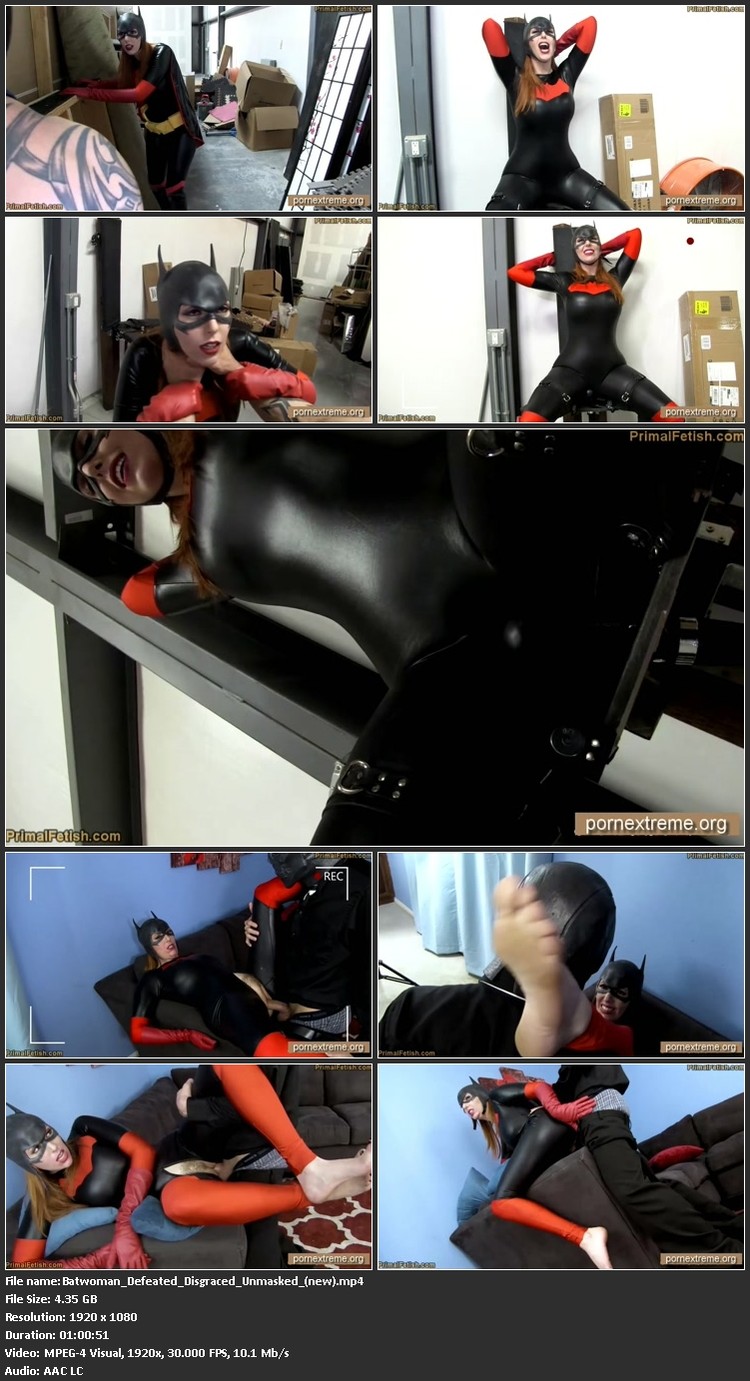