The most popular extreme videos
May 21, 2021admin

Hannah Ramirez is an Investigative reporter for the Green City Tribune and she is researching a book that is getting some attention. She joins Christopher Brown on his podcast show, explaining her latest efforts and giving some insight to the murders and the killer. She also has a clairvoyant energy that she uses to help her solve mysteries and crimes. They discuss her plans to visit the scene of the last murder where Belle Casey was murdered by the GCS and try to dig up more clues. Unfortunately for her the Green City Strangler is listening to the podcast and follows her foolishness to the scene. Hannah steps into Belle’s house and immediately gets a vibe. She goes around the house feeling the energy and getting some visions of the happenings leading up to her death. She also feels like someone is watching her and when she looks no one is there so she chalks it up to her energies. As she moves around seeing visions, she goes to the bathroom and wants to get more in tune, so she strips down to her birthday suit and finds the robe that Belle wore before she was killed. As she wears it she is distracted that the Strangler had sneaked into the house and chloroformed a rag. As she follows the steps of Belle in a trance, she is surprised when an arm comes out of nowhere and hems her up, chloroform rag in hand he covers her mouth and nose and she fights hard, flailing her feet, trying to gain some ground but the strangler is taking her out. She loses steam and goes limp. He drags her so her feet are on the floor, to the sofa. He sets her feet on the arm of the sofa and admires them starting at her thighs and slowly working his way to her feet. He smells and rubs her sexy toes and feet. He takes his time to admire her but he has bigger plans, moreso that any of the others. He drags her to the bedroom so her feet are on the floor.

When Hannah comes to she is dazed, in position like a crucifix on the bed, in the background a recording of the podcast is going and she sees the GCS sitting in a chair listening on his phone. She pleads to please let her go and not to do what she thinks he is going to. He doesn’t speak until after the recording stops. He tells her how dumb she is for going live, and all the lies she is spreading about him and his affairs. He tells her he is going to kill her and she pleads and begs for her life, crying that she wants to just go. She tries to run but he pulls a gun and gets her back on to the bed. He explains a few things and tells her he will let her go if she tells him where his wife, Savannah Costello, is and how to find her. When she starts crying and pleading that she doesn’t know, he tells her he believes her and she was never going to get out alive. He pounces on her and starts to choke her with his rope. She fights him and squeezes out a few words that make him stop. “I know where your sister Ryanne is!” He stops strangling her and she still fights but realizes he might let her go as he rolls off of her and stares at the ceiling. She lets down her guard but doesn’t try to run, fatal mistake, as she least expects it he jumps back into action and gets the rope around her neck good, trying to get his jacket off and strangle her at the same time. He gets a good grip on her and starts to pull harder! She kicks and flails her bare feet as he tugs on the rope, setting it in hard for the kill. She kicks and claws at him but to no avail. He brutally strangles her in a couple of different positions as she tries to fight him off, but her jerks and bucks turn to spasms and a death rattle as her eyes go wide and she goes limp. Then the aftershocks and death twitches come through. Little by little they start to get shorter and less frequent until they stop. He admires her as he takes his rope and starts to caress her and move towards her feet. he moves down and sniffs and worships her tiny feet and toes as he plays with her. He positions her back in the crucifix position with her head propped up with a pillow like the others. He takes a few pictures for his own memory, grabs all of his stuff and leaves the scene. Now he is on a mission to find his Sister in Law Lexxi, his Sister Ryanne, and then his wife Savannah. 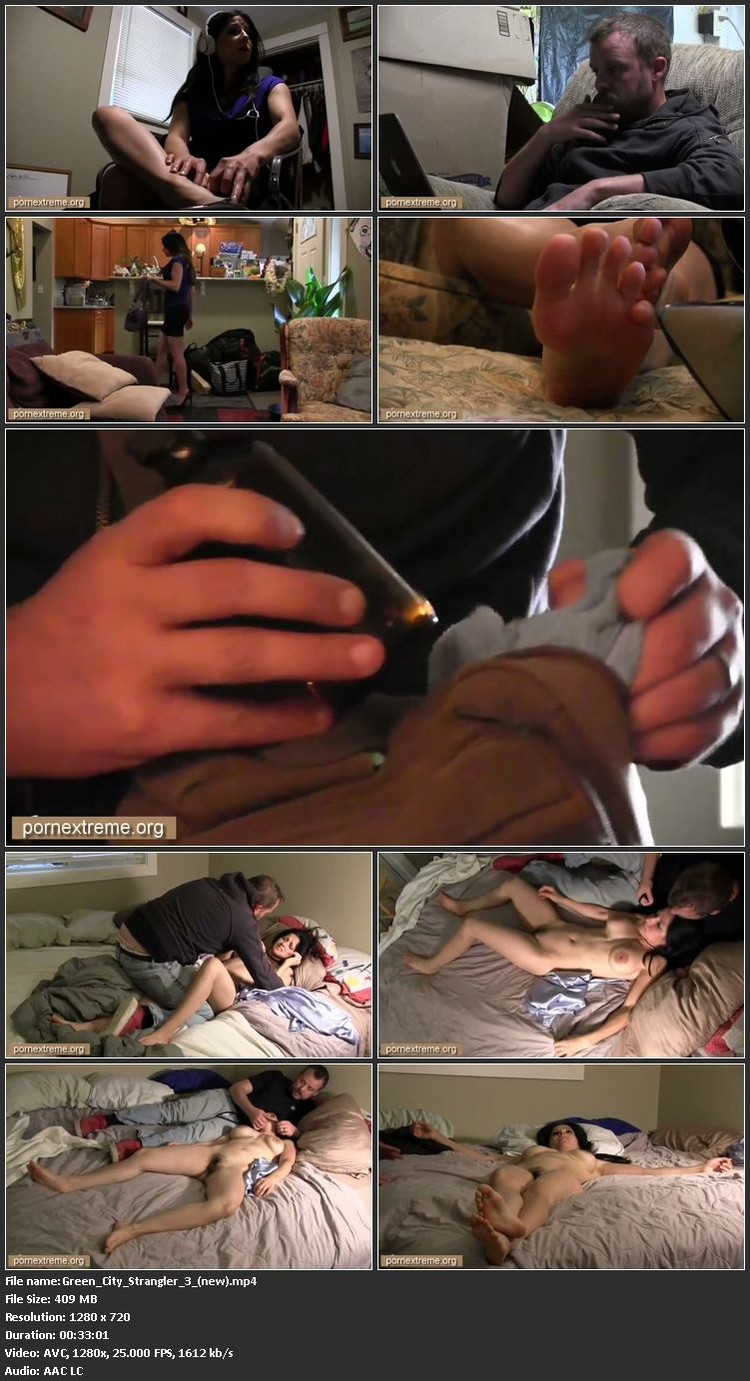