5 girls in scout camp go to sleep to the large bedroom with many beds. They are too tied after hard day and fast fall to sleep. A burglar enters the room to steal their mobile phone, money and jewelry. He decides also to kill them all to hide all evidences… He attacks sleepy Luiza first. She is shocked to be attacked and choked after sweet dream. She tries to call for help but another girls are just sleeping. She can’t shout, she is just croaking, kicking her legs and tries to free herself but all is in vain. She dies… A burglar takes her phone and goes to choke another girl – sleepy Yana. Before killing a girl, he decides to joke a little, lies down next to her and hugs her sleeping. In a dream, I feel the touch of a strong man, Yana smiles and hugs him, but he grabs her neck and she wakes up in horror. She starts to wheeze in a panic, jerk her legs, try to wake other girls, but also remains without help, as other girls are sleeping. She is dying in agony. The robber takes her valuables, takes the body, transfers it next to the dead Louise, puts the bodies on top of each other, lifts up T-shirts and claps on her asses. Now he is going to kill Sally. Alice M wakes up and the killer hides behind the bed. She sees that Luza and Yana are lying together. She wakes Annabelle to tell her that the girls turned out to be lesbians and sleep together, but Annabelle wants to sleep and asks Alice not to bother her. The killer comes out from behind cover and attacks Sally. First he chokes her on her bed and then puts her to the floor and finishes her and carrying her body to the bodypile near dead Luiza and Yana.

Alice M sees again already three girls in one bed and she again tries to speak with Annabelle about it but Annabelle is sleeping. The girl in a panic pulls her hands to Annabelle, pushes her, tries to tear off the blanket from her, but the robber pulls her far and mercilessly strangles her with both hands. He takes her body and places to the bodypile. A killer wants to play with bodies and forgets about Annabelle. Annabelle wakes up and sees how killer playing with dead bodies stripping them. She is in shock and hides under the bed. Killer looks to the Annabelles bed, sees empty bed and after making sexy bodypile goes away. Annabelles goes out her shelter and runs to check her friends. All of them are dead. She runs from the room to the staircase. Suddenly killer returns. Annabelle in panic returns to the room and she doesn’t know where to hide. She decided to pretend to be dead, butt off her lingerie and lies to the bodypile making funny death stare. Killer returns because he was sure there were five girls in the room but he killed only four ones. He comes to the room and check beds. All are empty. Then he looks at the bodypile. Five girls… Strange… He is looking attentively and sees how Annabelle choking and blinking. Gotcha! He pounces on her, strangles her, and then breaks her neck! Now all is ok. Five dead half-naked, unbridled girls remain dead in the room, and the killer leaves the house 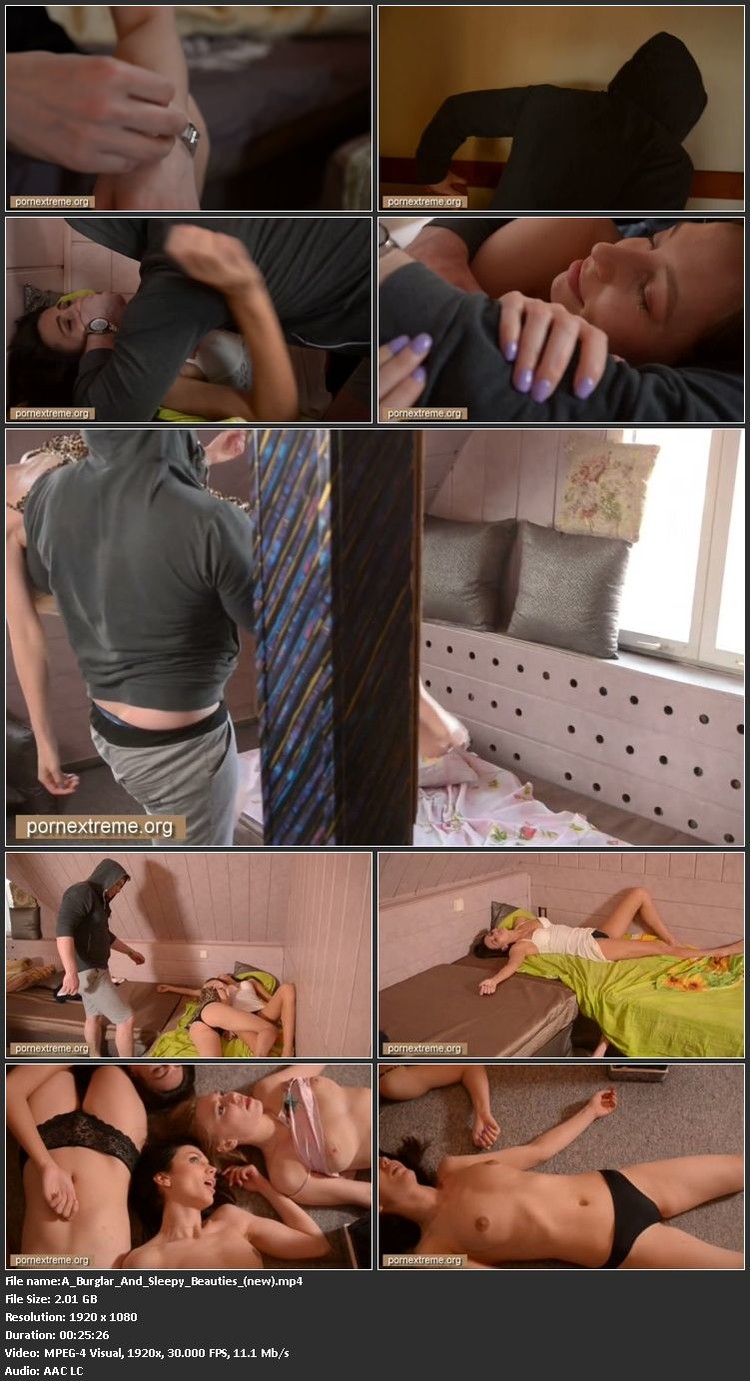