Genetica’s twin sister Jessica has been trying to find her sisters killer for a couple of months, after the Detective won’t return her calls, and there are no leads, she knows she can’t go out on the town to get answers, and it is too soon to0 have fun. She decides to invite a few friends over to have a few drinks and socialize. Jessica is still too distraught to go out. Some friends even drive a long way to come stay the weekend, but After killing the detective Freya, Belle found some numbers in the phone and called Jessica to introduce herself as Genetica’s friend who was trying to connect with Jessica to try and find some answers. Belle shows up early for the get together to introduce herself and help out before guests arrive. As they hug and chat about Genetica, Belle offers to help make coffee, Jessica shows her how and as she is grinding the beans, Belle is taking off her g-string to strangle Jessica with and takes her from behind. She pulls hard getting her turned around and strangling her hard. Jessica tries to grasp at the g string and Belle just pulls harder, yanking on the panties to get a tighter grip. Jessica chokes hard and they make their way to the floor, Belle behind her as Jessicas ass hits the floor and her feet kick hard, making her heels come off and she is bare foot. Belle is pulling and making it very tight. Jessicas eyes bug out and her tongue tries to get air but all she is getting is strangled to death. The sister tries to grab at Belle and slowly fades as she continues to free herself to no avail. It is too much for her and she slows down, twitching and bucking her hips slower, spreading her toes and slamming her ass to the floor. No matter how hard she tries Belle gets the upper hand and Jessica dies, eyes wide open. She wants to check her out, and see if she is identical to her twin, so she frees the gals boobs and confirms the sexy tits.

She picks her up and drags her to the room to stash the body. She undresses her except for her panties, then rag dolls her around before hearing a car coming up the drive. She closes the door and gets herself together before the two gals Hannah and Ryanne knock on the door. She answers and they immediately start to hug and introduce each other. Ryanne asks if she is Geneticas friend and she nods and they give her condolences. Ryanne is needing to go to the bathroom after the long ride and disappears to the back, while Belle leads Hannah to the sofa to chat. Belle quickly diverts her attention to coffee and so she sits on the sofa while Belle goes to brew a cup. She knows she needs to figure out a way to get them both, but there isn’t enough time. She talks to Hannah as she sneaks up behind and before she knows it, Belle has her in a choke hold, and the she fights hard, kicking her pantyhose clad legs and her pussy showing through under her skirt as she fights. She grows weaker and weaker, eventually passing out from being choked. Belle is just saving her for later. She rolls out from under her and goes to check her out. She immediately starts to mess with her legs and removes her shoes so she can sniff and suck her pantyhosed toes. Hannah is sexy, choked out cold, and Belle wants to use the pantyhose to strangle her and her friend so she slowly removes them, checking her pussy before Ryanne interrupts her coming out of the bathroom. Belle grabs the hose and hides quickly by the door. Ryanne comes to the living room and sees her friend Hannah unconscious and half naked on the sofa and starts to panic. She is so stressed out she doesn’t see Belle until it is too late and she is behind her with the stocking leg of the pantyhose wrapped tight and pulling hard. She pulls so hard Ryanne comes off the kneeling position to upright on her feet, her heels flailing off as Belle pulls her back. Ryanne is a real fighter and Belle is hip, she even says that Redheads fight better she hears.

The pantyhose is so stretched out, it is a foot and a half away from Ryannes neck and Belle pulls her back to the chair, on top of her strangling her to death. Ryannes eyes bug out of her skull as she protrudes her tongue way out to fish for some kind of air. Ryannes sexy legs kick and her toes flex as she fights for her life but Belle is just too much for her to handle. She slowly fades, twitching and bucking her ass, then still. Eyes going from wide and stressed, to dead and still. Now she knows there is one more guest to arrive any minute so she looks around, seeing Hannah she pushes Ryanne to the side like garbage, rolling her on her side and flopping her on the floor. She goes to Hannah and picks her up, over the shoulder carries her to the bedroom, getting her next to Jessica in the bed. She arranges them and makes sure there is room for two more corpses, even though they are not dead yet. She goes out to grab Ryanne and rag dolls her body to get her into position to drag her by her underarms and into the bed. She pulls her up and on top of her flopping the dead body on top of her in the bed. She lays there for a moment sizing up what she has done with an evil smile, then gets up and the bodies arranged adjacent in the bed. She gets herself straightened too and goes into the living room, grabbing all the shoes and purses, tossing them into the bedroom and closing the door as she hears the car pull up. She rifles through the drawers and finds a piece of thin cord and tucks it in her bra for the newby. She straightens the furniture and the rug too so the new arrival can be persuaded to sit down. Belle looks in the mirror as she straightens her hair and says. “You can do this Belle, you can do this.” Right as the door knocks. She answers and OMG it is Kiki, the real party girl, all blonde and bubbly. They introduce and Kiki doesn’t even notice the other girls are gone, but Belle tells her they went to grab booze, but she would concoct a drink from her special stash. The scene fades out to credits…..TO BE CONTINUED PART 5 TOMORROW WITH KIKI AND HANNAHS STRANGLES AND BODY PILE MOLESTATION. BELLE IS VICTORIOUS AND LIVES TO KILL AGAIN! 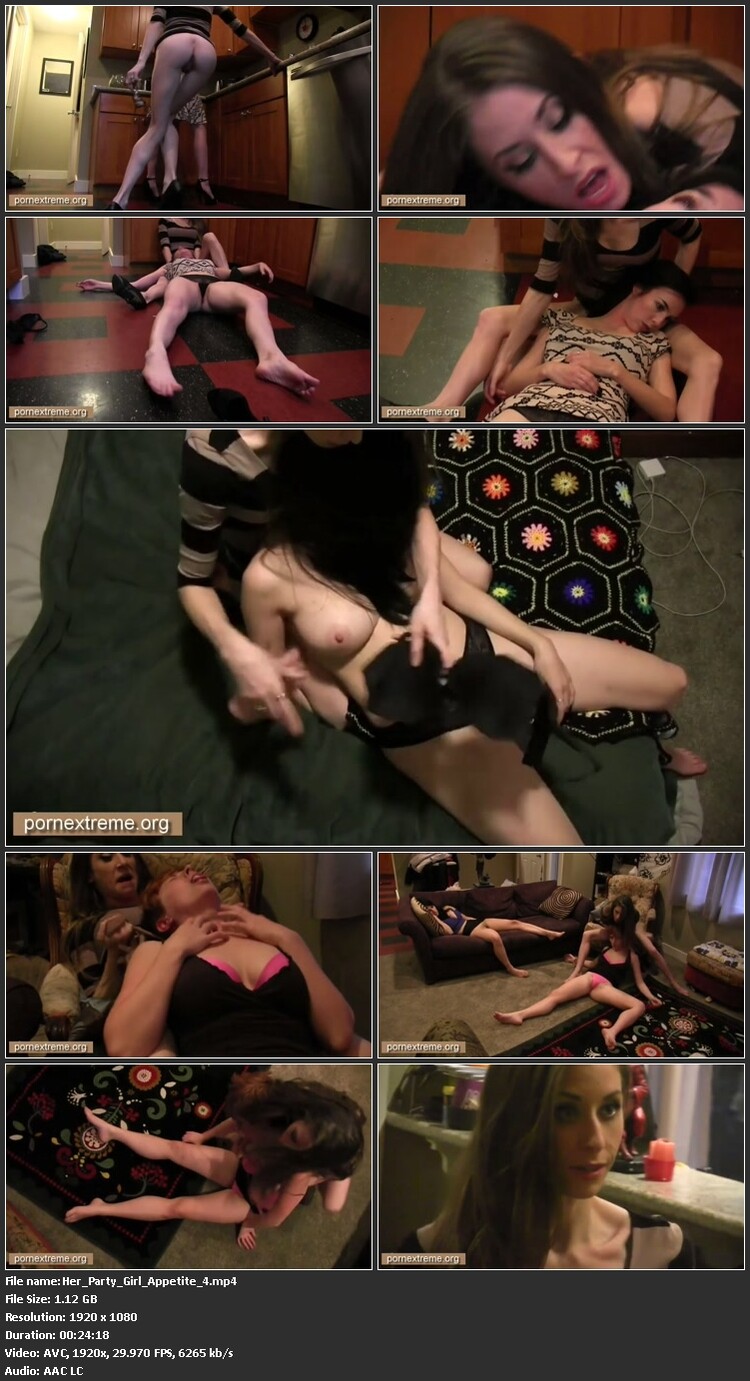