Lexxi is the champion after Coco and Kiki disappeared from the club, but the new kid in town, known for her glass jaw, but tough and resilient stance, and always able to come back for the win. Lexxi is so confident that she will win, she schedules a meeting at a hotel suite. She stretches and then gets a call from Freya who is downstairs in the lobby. Freya arrives and Lexxi locks the door behind them then shows Freya to the room where they will fight. As Lexxi explains the rules she tells Freya she has to take off her shoes, and after much jawing and resistance, she removes her shoes, and right after she’s about to remove the second shoe, Lexxi knees her right in the cunt, dropping her, but Freya is tough and gets back up to square up with Lexxi. She gets Lexxi with a couple shots then a shot to the body, doubling her over and Freya knocks her to the floor. Lexxi tries to hold her own but Freya is getting the best of her, making better connections with her punches, and after getting knocked to the floor and couch a couple times, Lexxi seems stunned. Frey turns to walk away but Lexxi catches her leg and pulls her to the floor. She gets her up and punches her more, kicking her too, after landing a few rights, she has Frey on the floor by her hair and knocks her out cold. Frey’s eyes flutter back into her head before she goes out. Lexxi climbs on the unconscious fighter and starts to undress her, removing the sports bra, then playing roughly with her tits, slapping and squeezing them, roughing them up a bit. She rolls the limp fighter over ragdolling her and removing her yoga shorts, then slapping and kneading her ass like bread dough. She stands up and takes off her attire too, leaving them both in only a thong. She gets back on top of her and slaps her awake.

Freya pretends to be stunned and attacks Lexxi getting her to the floor quickly, then picking her up by her hair, punching her down then again, then kicking her in her ribs a few times. Lexxi trips her up again and they are on the floor but Lexxi springs up into action, knocking Freya down again with a right hook. Freya gets up slow but then comes with a combo knocking Lexxi back to the small love seat, then pounding on her over and over, wailing on her. She snatches her up off the sofa by her hair to the floor then straddling her punching her face with right, then left, then a final punch to knock Lexxi out cold. As she is out Freya smacks Lexxi’s tits around a bit, grabbing and squeezing them too. She ragdolls her rolling her over smacking her ass and playing with her limp body. After playing with her a bit, she slaps her awake and lest her know its round three. Lexxi is visibly stunned but a veteran so she bounces back throwing a couple big punches and landing them. She trades blows with the new gal, getting her on the floor and on top of her straddling her punching in the face back and forth, slamming her head to the floor a few times until Freya gets a second wind and flips Lexxi over punching her down then snatching her up by her pony tail, leading her to her demise. She stands her up and tees off on her with a right, knocking her out cold to the floor(shown two different times, different takes and angles). After knocking Lexxi out cold again, she knows it is time for death so she drags her by her arms to the sofa, sitting with Lexxi in a choke hold and as soon as Lexxi wakes up, she breaks her neck, making her go immediately limp. Lexxi is dead, butt on the floor neck back, and Freya wants to make sure, so she stands over her, grabbing her chin and head from the front and breaking her neck again, with a loud crunch. She quickly takes off, seeing her sexy ass as she leaves Lexxi there to be body panned 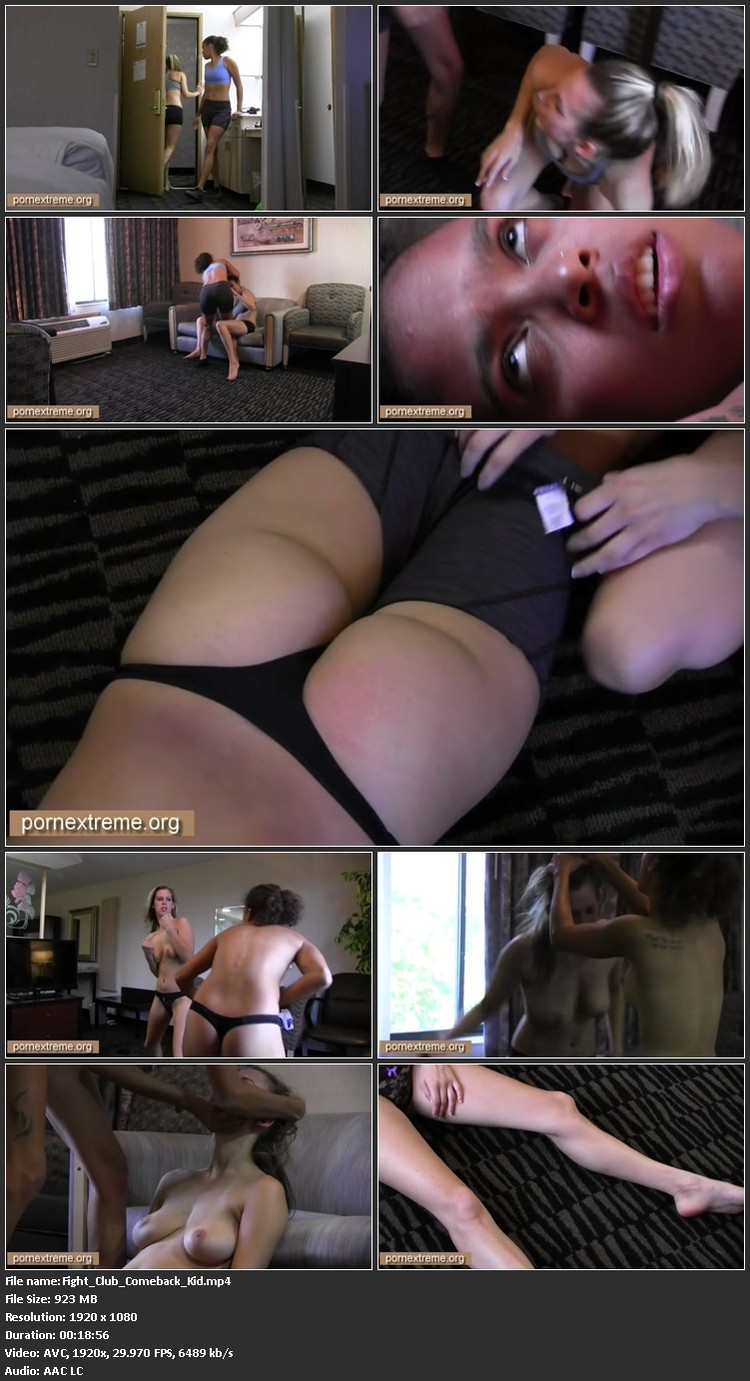